Return of the Corncrake 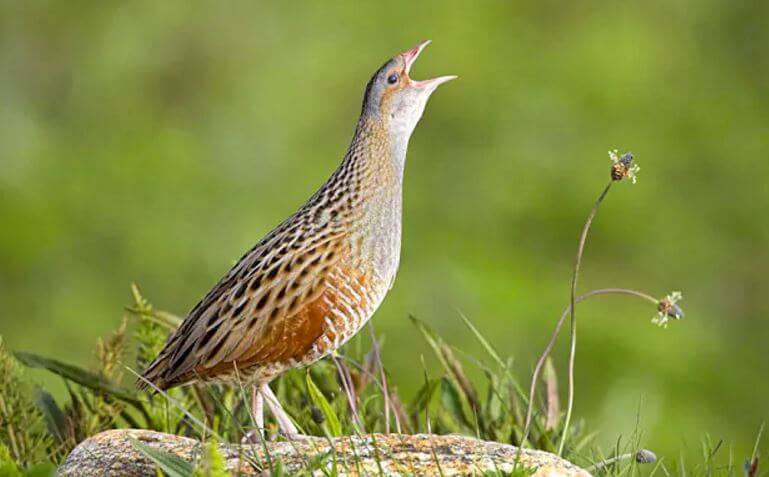 Sitting down by the shore, enjoying the fading evening light, the stillness and peace of the moment was suddenly broken by the unmistakable ‘krek krek’ of the corncrake, an almost forgotten sound in Kilchoan. These delicate looking, chestnut feathered birds are related to rails; however they live on dry land, enjoying the shelter of high grasses. Due to their secretive choice of habitat they’re rarely seen but are often heard with a rasping call which can by heard up to 1.5k away! Historically they were very common across rural Scotland but suffered massive decline due to changes of agricultural practices in the 20th century. A 1991 conservation programme sought to protect and encourage the population and they have just recently seen some re-emergence. However you’ll only find them in very isolated spots, such as the Hebrides and now western Ardnamurchan, which has a remoteness akin to the Isles.

People say corncrakes are ventriloquists. If that’s true we may never know if there’s one distant corncrake calling for a mate, or three very nearby. The calls were later joined by the melancholy hooting of an owl from Meall mo Cridhe.

At around 11pm twenty five or thirty deer trotted onto the shore, their silhouettes nimbly and elegantly negotiating the marshes and rock pools. They stood still for a moment when they spotted our campfire then headed on east, the sound of pebbles crunching underhoof.

Kilchoan may not be known for its nightlife but sit out on a still evening and you may be surprised just how lively it is.