The Sanna house of M.E.M. Donaldson

Sanna is not only famous for it’s beautiful bay, but it’s also known as a village, where legendary historian, photographer and author Mary Ethel Muir Donaldson built her house. 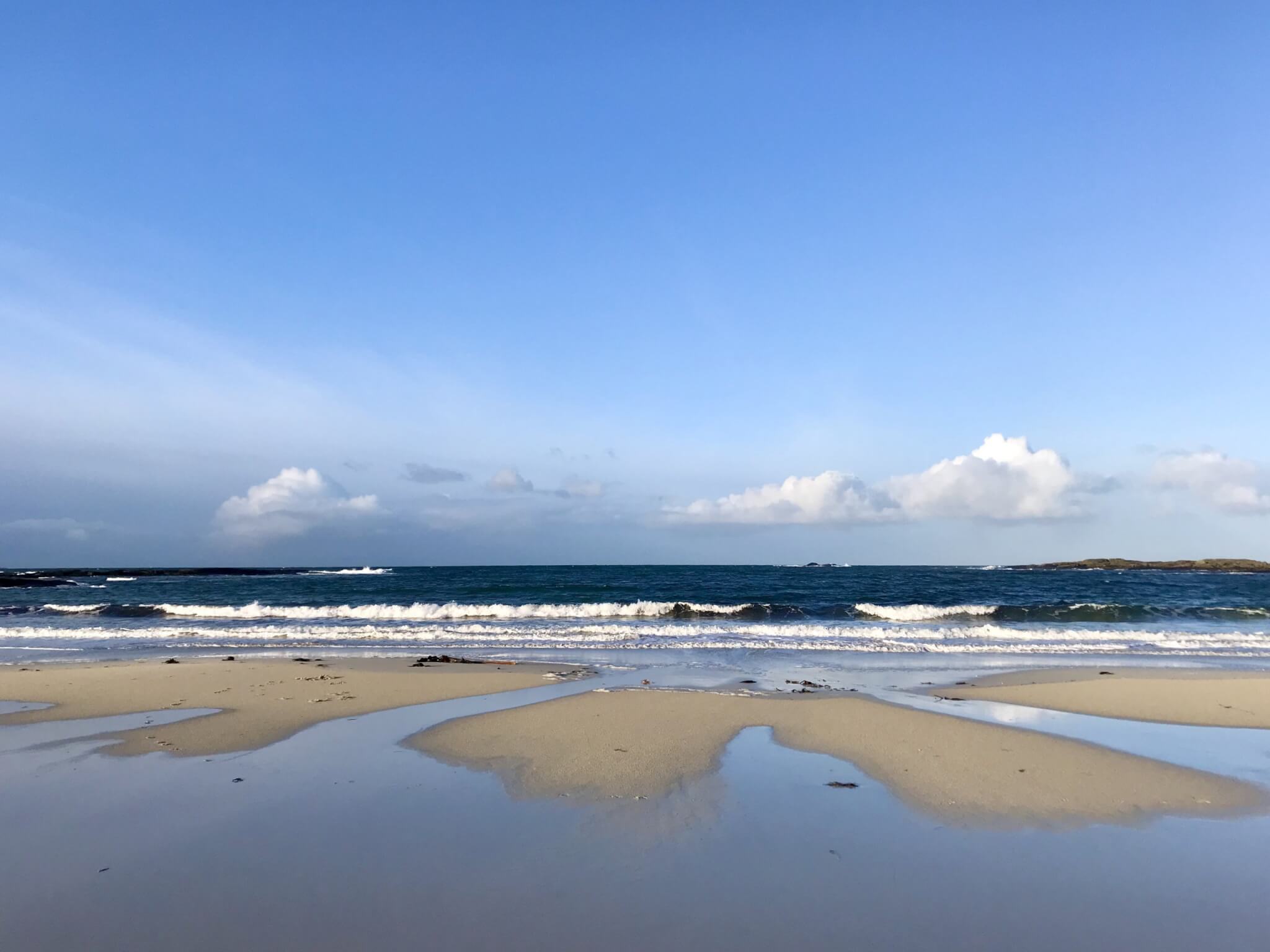 Colleagues knew her as M.E.M.D., and Western Highland friends called her “Herself”, which is a Highland way of showing respect for a lady. She was travelling all over the Highlands, and photographing crofters, fishermen and other country folk in remote villages. Some of her “models” have never seen a camera before, and some were afraid that her camera lens was “a peculiarly baleful variety of evil eye”. Her books – The Isles of Flame (1913), Tonal Mactonal (1919), Wanderings in the Western Highlands and Islands (1921), Islemen of Bride (1922), and Further Wanderings: Mainly in Argyll (1926) – as well as her photos, are a precious source of information about the way of life in the Highlands and Hebrides a century ago.

As John Telfer Dunbar writes in a 1979 biography, “she wanted to find a way of life which was a challenge both to her mind and to her body”. This desire led her from England to the Highlands, where she was travelling with a camera for half a century. Even the story of her house in Sanna is in the spirit of her desire to challenge mind and spirit. But why did she choose Sanna as her headquarters? 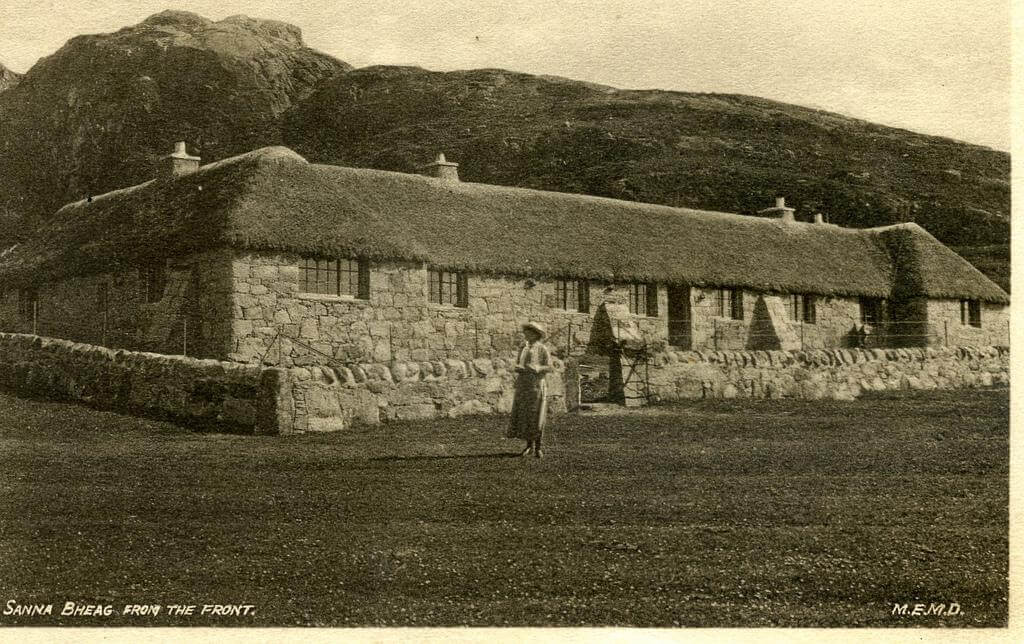 From the first visit to Ardnamurchan Miss Donaldson became “it’s willing, nay exultant, captive”, it’s easily understandable. First of all, it’s the most Westerly part of the West Highlands, which she was in love with. Secondly, here are a lot of archeological sites, waiting for her to investigate. Thirdly, Mary Ethel Muir was a faithful Christian, and Ardnamurchan was an entry point for Christianity to Scotland. Ardnamurchan was her dreamland, and here she wanted to come back from her journeys and write books on Highland history. Last but not least, it was the land of her Clan, though her family at the time of her birth lived in England.

M.E.M.D. started building her Sanna Bheag in 1926, at the age of 50. It was fundamentally important for her to build it in a traditional way, using blue granite from the nearest hill and covering the roof with local heather and straw. Other materials were being brought on a Puffer. At low tide horse-drawn carts were being brought close to the Puffer, unloading it, and then delivering materials up to the construction site. 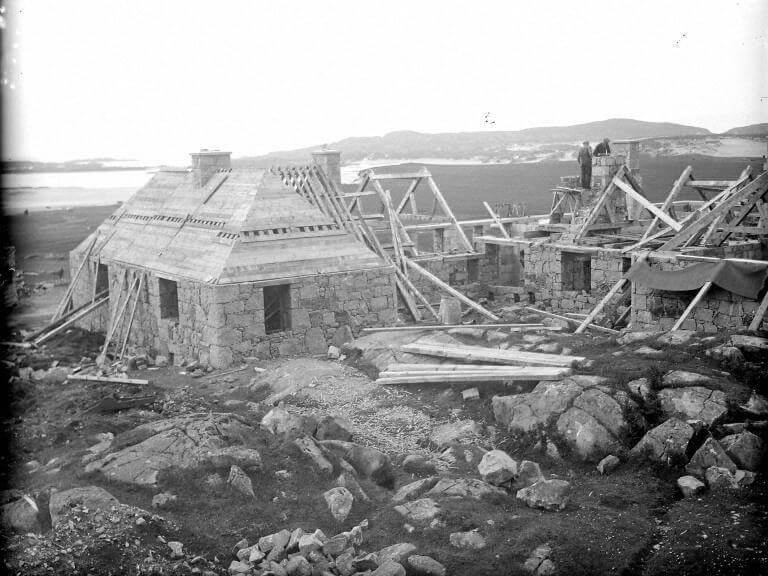 Both modern and traditional, the house with 8ft high walls was constructed by professional stonemasons from the Isle of Mull, and with the help of local crofters. Miss Donaldson herself participated in roof thatching. With her life partner, artist Isabel Bonus she has made a beautiful garden full of local flowers. She was proud to greet famous writers at her new home, and happy to live a quiet, intelligent life, full of work with books and photos.

This kind of life has unexpectedly ended in 1947, when a fire devoured the house. Nobody knows the cause of this tragedy, and M.E.M.D. preferred not to talk about it. She then moved to Edinburgh, and has eloquently called her last book Till Scotland Melts in Flame (1949). After a while Sanna Bheag was rebuilt by new owners, though with a flat roof it looks more like a military object, rather than a sweet home it used to be.